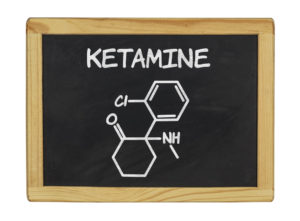 Ketamine infusions inhibit the N-methyl D-aspartate (NMDA) receptor in our central nervous system.  This receptor is activated by a neurotransmitter called glutamate.  Glutamate is found at excessive levels stress, depression, and certain pain conditions.  Blocking the effects this excess can help alleviate symptoms.

Ketamine also serves as a dissociative anesthetic in the operating room and as a powerful pain reliever in emergency rooms, burn centers for dressing changes, and more.  It is a very safe medication used in the proper and avoids serious side effects of other pain medications and anesthetic.  Unfortunately, as with many other useful medications, it can be abused when used in extreme doses.  It is important to note, the dose used in a ketamine infusion center is significantly lower what is used even in the controlled operating room or ER setting.

Every year, 13 million to 14 million Americans have major depression. Of those who seek treatment, 30% to 40% will not get better or fully recover with standard antidepressants. That puts them at greater risk of alcohol and drug abuse, hospitalization, and suicide attempts. Now, though, a growing body of research shows there may be new hope: the anesthetic drug ketamine.  10-30% of those with severe depression fail multiple trials of medications.  The remaining 30 % are stuck.  They may try therapies, such as electroconvulsive therapy which only yields 25-30% response.  In contrast, if those patients received ketamine infusions, they will have up to 70-75% successful relief from symptoms.

Perhaps more distressing are those people with suicidal thoughts who also have not found help from typical medication and therapies.  Ketamine has a profound and rapid impact.  A patient may have relief of symptoms as early as the first infusion.  Often, it is a bit more gradual over ensuing infusions, with the initial round of 6 infusions completed within 2 weeks.  This is in stark contrast to oral medications that may sometimes take several weeks to have an effect.  A person with suicidal thought does not have this time to wait.

Guidelines are under preparation from societies such as The American Society of Regional Anesthesia and Pain Medicine. While continued clinical studies are needed to optimize protocols, certain methods of delivery have shown better outcomes.  Some patients are helped tremendously, and even receive some reimbursement from their insurance companies.

At we hold the same sentiment, as for depression, for those who have repeatedly failed traditional treatments and medications and continue suffering daily from chronic pain. A controlled, cautious and calculated approach to IV ketamine therapy based on available evidence should be offered.

Percentage of people who can get positive results from ketamine therapy